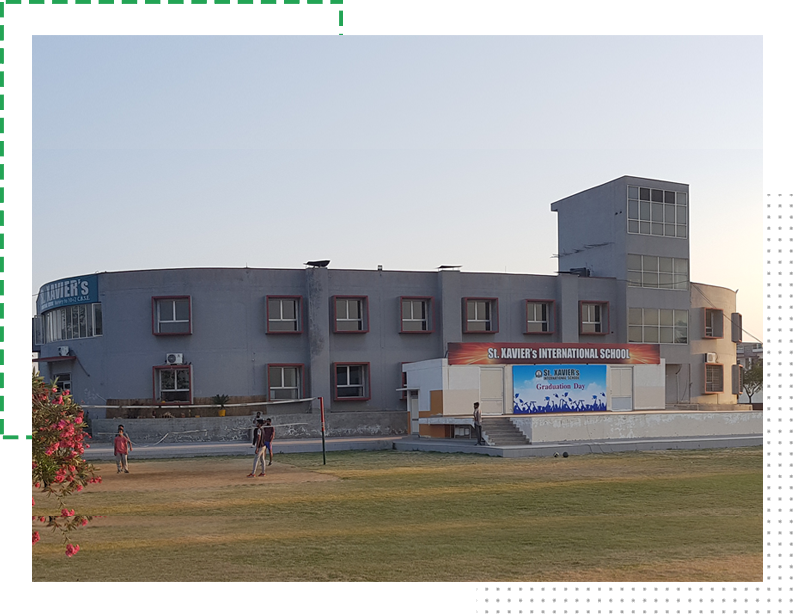 St. Xavier’s International School, Patiala is the first green school of North India which offers a progressive curriculum uniquely designed to meet 21st Century global needs, committed to impart quality education, envisioned to produce globally competitive and self reliant learners. Established in the year 1999, it has quickly grown to be one of the leading CBSE affiliated schools of Patiala.

The building of the school is made up of fly ash bricks which has 50% more compression value. Besides, the building is built on interconnected concrete pillars and is earthquake proof. Outer walls are 13” thick like old building but with modern innovations of 4” thermocol inserted between the walls, leading to much better insulation and shading allow maximum daylight and minimum glare. Solar chimneys and wind towers minimize the need of air conditioning.

Aristotle once said that,” Educating the mind without educating the heart is no education at all “

The school system of education works as a catalyst in making each child a balanced human being having his core strengths embedded in the learning experiences emanating from our rich socio-cultural roots.

The school has a technical sound infrastructure with well equipped Physics, Chemistry, Biology, Mathematics and Language laboratories to provide qualitative education to the students. The enriched library, digital dance and music room gives a complete exposure to the students and provides a wide platform to explore and reveal the joy of learning.

The commencement of high-tech E-smart classes makes the students competent in global environment. Caring for its students, the school has installed RO system to provide clean drinking water. A network of CCTV cameras takes care of overall security. The Air Conditioned Nursery Wing of the school is an amalgamation of traditional & modern values imbibing the best of both.

The school focus is child centric education that allows each child to recognize and realize his/her dreams and skills and to ignite the passion to excel. The school offers an extensive range of co-curricular activities, study circles, clubs, debates, elocutions, quiz contests, dramatics, music and dance – Western and Indian and excursions under the careful guidance of dedicated teachers. Inter HouseCompetitions are organized from time to time to develop healthy competition among the students

School motto of happy children make better learners is principally followed be it the comfort of children, the educational aids, play way methods or computer education.

Francis was born on 7th April 1506 to Don Juan De Jassu and Maria De Alpilcueta among the band of seven brothers and sisters. Francis, whose ambition lay rather in becoming a distinguished scholar and doctor of philosophy, or following an ecclesiastical career in his native Navarre (Spain), where his father was the President of the royal council.

But at the famed University of Paris he fell under the spell of St. Ignatius of Loyola, who during two years of companionship never ceased to admonish him: ‘What does it profit a man to gain the whole world, if he suffers the loss of his soul’. These golden words by Ignatius changed him completely and along with St Ignatius and other companions they laid the foundation of the Society of Jesus. At only a day’s notice, Francis set out for God in Indies, in 1542. Francis buried himself learning the local language, nursing the sick, preaching and teaching catechism.

Ten years of missionary labour had taken Francis into over 50 kingdoms, enabling him to win almost a million of souls for God. He succumbed to fever on his way to China on Sancianisland on 3rd December, 1552. In 1553 his body was found incorrupt and fresh. Till date his body is preserved and venerated in BomJesu Basilica at Goa.
St. Francis Xavier was beatified in 1619 and canonized by Pope Gregory XV on 12th March, 1622.
St. Xavier’s International School, Patiala thus aims at making its own contribution towards a transformation of the present-day social condition so that principles of social justice, equality of opportunity, genuine freedom, and respect for religious and moral values, enshrined in the constitution of India, may prevail, and the possibility of living a fully human existence may be available to all.

Perhaps the best-known education in India is imparted by Jesuits. They conduct not less than 52 university colleges, 17 Institutes of Business Administration and 220 high schools spread throughout the country, almost all of them among its most reputed (for example: St. Xavier’s, Calcutta, Mumbai, Ranchi; Loyola, Chennai, Vijayawada; St. Joseph’s, Bangalore, Trichy; XLRI, Jamshedpur). In them, more than 360,000 students belonging to every religious, linguistic and socio-economic group, receive their education.

No Jesuit education is complete without attention to the development of the moral and intellectual qualities of leadership: love for the country, integrity, human relations, understanding, hard work, organisational ability, cooperation and teamwork, and the power of expression in speech and writing. St. Xavier’s International School Patiala specially focuses on nurturing the students in the way that they should be framed into the responsible citizens first and definitely we believe a dedicated, responsible and ethical persons will get the success on their own. 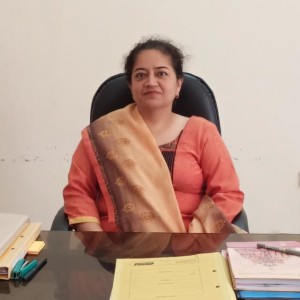 Education is not just a process of giving knowledge for a future job but a lifelong process which creates an understanding of moral and ethical values to guide one’s life in a right path.
To my mind education as an idea, is not just about bricks ,mortar and concrete , but about building character , enriching minds and about varied experiences that last a lifetime.
I believe my role as an educator is to guide and nurture the next generation to establish skills to achieve health, respect, prosperity and a sterling character.
I am passionate about students being empowered to succeed. As Principal, I use all tools available to inspire staff, students and community to work together to promote student achievement and well-being.
I am an avid supporter of effective and innovative professional development that encourages teachers and principals to be reflective and to continuously examine our practice to provide quality teaching and learning for each student. My role as Principal is to keep up with latest trends and research and be an active partner in the school’s professional development.
The ability to be innovative and creative is important to me. I enjoy being challenged and inspired by the people around me. I aim to enthuse and challenge staff and students to also be inventive and imaginative in their learning and day to day tasks.

I believe that having quality, inspirational and passionate teachers is essential to a school’s success. To borrow John Hattie’s words; “teachers should build classroom climates where errors are welcome, student engagement is the norm, questioning is high and students gain reputations as effective learners.”
I enjoy celebrating successes and acknowledge hard work of staff, students and community and believe this is one of the contributors fundamental to a happy school environment. All staff, students and community should feel valued and appreciated at school.
Community engagement and involvement in the school is important to me as Principal. I regularly consult with my community as part of school self review and encourage community engagement in the curriculum and learning programmes.
“Do the work with intention not because of compulsion.”
With all my love, best wishes and blessings..
Neha Kashyap
PRINCIPAL
St. Xavier’s International School, Patiala

To provide high quality teaching and learning experiences which allow each child to be valued as an individual and achieve their full potential within a happy and stimulating environment.”

The mission of our school is to provide all students with a high quality education that enables them to be contributing members of a multiethnic, multicultural, pluralistic society. We seek to create an environment that achieves equity for all students and ensures that each student is a successful learner, is fully respected, and learns to respect others.

We cultivate the potential in every student to thrive as a global citizen by inspiring a love of learning and civic engagement, by challenging and supporting every student to achieve academic excellence, and by embracing the full richness and diversity of our community.

We will prepare all students for life by providing a challenging curriculum that connects students’ lives and their future in a safe, supportive, and nurturing environment

School will not be responsible for the loss of the personal property brought by pupils.

No student will be allowed to go away from school during school hours without previous written application from parents stating the reason which must be a serious one.

The schools reserve the right to compel the parents to withdraw their children if the progress is unsatisfactory or their conduct is harmful to other children.

Students must come to class with the lesson well prepared and home-work completed.

The school diary should be brought daily to school

The entry student should be neatly dressed. They are expected to come daily in school uniforms.

All streams Science, Commerce and Arts are available.

Green and clean environment to ensure good health and hygiene to the children.

Smart Classes introduced in the school to deliver quality and innovative method of Education.

PARTICULARS OF TEACHING STAFF ( TO BE UP-DATED TIME TO TIME)

SECTION WISE ENROLLMENT OF SCHOOL FOR THE CURRENT SESSION